CGAP recently launched a CGAP brief “Driving Scale and Density of Agent Networks in Perú” based on a CGAP-led research on 26,000 banking agents and 24 million monthly transactions to describe the relationship among factors that will help these agent networks to operate viably in more remote areas of the country.

Having spent so much time on the Latinamerican “correspondentes non bancarios” during my time with the CGAP Technology Team, I am excited to write again about what the agents have changed in terms of access to finance in many Latinamerican markets. Since 2005, banks in Peru are allowed to roll out agent networks.

There banks , like BCP, BBVA or Interbank, have been very active in rolling out their agent networks, compared to some of the microfinance institutions or cooperatives. In addition, to these often very large networks, third-party platforms, such as GloboKasNet, have emerged to link various banks, MFIs and cajas to a common payment platform, meaning that one KasNet agent may offer services on behalf of multiple financial institutions.

With today more than 24,000 agents, CGAP had launched a blog post “An Analysis of Peru´s cajeros corresponsales” in 2008 where the country was still showing only 2,400 agents ranking forth after Brazil, Philippines, and South Africa. A report from the Global Partnership for Financial Inclusion on Peru describes this impact on access to finance very impressively: Between June 2004 and June 2013:

In the picture below, one can see the impact of the banking agent regulation in 2005 on access to finance: 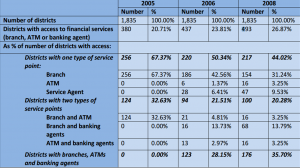 Introducing a simplified account which can be immediately opened at the agent having him/her do the KYC (only asking for clients´ID) without asking the client to come to the branch. The simplified account are defined as low-value accounts subject to strict transaction and maximum balance limits; account balance cannot exceed the equivalent to $720 and monthly transactions cannot exceed $ 1,440. Uptake of these accounts were however slow and it is hoped that the development of mobile financial services will drive the use of these accounts. Since September 2013, banks have to report on the number of these accounts among their general account base,

Regulation of Emoney. Up to today, electronic money is prohibited in Peru and its regulation completely undefined. Branchless banking has taken the form of third-party agents, generally small business owners, offering cash-in cash-out services, and utility and (micro)loan payments.  Rather than customers using mobile phones, agents transact through a POS device which communicates with the financial institution through a satellite chip or internet connection.  There is a report by BBVA Research “The potential of mobile banking in Peru as a mechanism for financial inclusion” which spells out fairly clearly the challenges and opportunities around mobile money in Peru.

ok…. so I guess this is an exciting market to monitor going forward. Let me get back to you in 3 months (April 2014) to see where/if mobile money has taken off in Peru.

This entry was posted in Allgemein and tagged ADC, banking agents, Latinamerica, Peru. Bookmark the permalink.