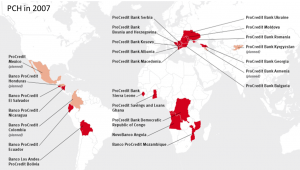 ProCredit Holding, one of the most successful and most structured greenfield holdings, seems to become used to exiting its African affiliates. They have been courted with equity and technical assistance from a range of development finance institutions (DFIs) including KFW, IFC, DOEN Foundation, and even a private pension fund TIAA-CREF.  Today, however, it seems as if the business of providing loans to microenterprises in Africa is not a strategic priority anymore for the Frankfurt-based network. In 2007, according to a presentation I found online, the world was still rosy, financial and economic indicators looked promising, and donors got excited in supporting ProCredit in reaching “the heart of darkness.” Well, Africa represented only 4% of assets of ProCredit Holding, so I guess decisions were primarily based on the South American (25% of assets), and Eastern European (71% of assets) context.

Then however, having opened in 5 African countries, it did not seem to be so easy and exits started:

ANGOLA – January 2008: Novobanco, the ProCredit affiliate is sold to Banco de Investimentos. The 2006 ProCredit Annual Report is still online and states “that it is already clear that it will be possible in Africa, as it has been elsewhere, to set up stable, target group oriented  financial institutions which have extensive branch networks […]. However, it is equally clear that doing so will require longer periods of time than were needed in Latin America or Eastern Europe.”

SIERRA LEONE – May 2010: Ecobank acquires ProCredit affiliate in Sierra Leone “since the business model of ProCredit Bank (SL) Ltd does not fit into the new minimum capital requirements of the Bank of Sierra Leone, the shareholders have decided that [our] operations have much greater potential under the auspices of Ecobank.”

I definitely do not want to sound sarcastic. It is more sadness which lets me write these lines. I know how great ProCredit can deliver services to its clients, what great people it hires locally and trains them perfectly, and how much depth and reach, i.e., how much it can push access to finance in its markets. It is just unfortunate, that it could not wait for Africa to catch up.

By the way, in 2013, I have been doing research for an IFC/CGAP publication digging a little deeper into the greenfield model. Stay tuned as I will be presenting the document in the coming days.

This entry was posted in Allgemein and tagged Africa, greenfields. Bookmark the permalink.