How does Ebola impact microfinance in Guinea, Liberia, and Sierra Leone? 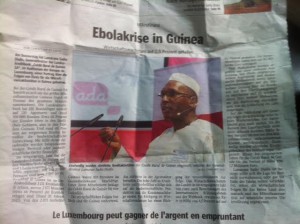 Last Thursday, the 30th Midi de la Microfinance organised by ADA had the topic “Ebola : What impact does the outbreak have on microfinance ? Concrete case with Crédit Rural de Guinée S.A.“.

These lunch time presentations and discussions take place in the Auditorium of the Banque de Luxembourg in Luxembourg and are a well-known even in the local microfinance community. Unfortunately I was out of the country, so I depend on secondary coverage by the Luxembourger Wort and Paperjam, and the documentation prepared by ADA. Unfortunately the very comprehensive report primarily provides information on how Ebola impacted the economy in Guinea, Liberia, and Sierra Leone. There is not a word about microfinance.

However, the economic impact is disastrous: 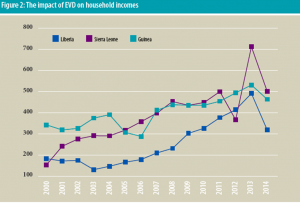 But to come back to our microfinance event: Invited had been Lamarana Sadio Diallo, Director General of the “Credit Rural de Guinée SA” to tell participants about the consequence of the Ebola virus on microfinance in the country. Credit Rural de Guinée SA is the largest MFI in Guinea (around 60% of the whole microfinance market) with 250 employees with 120 branches and around 300,000 clients. 60% of their clients live in the rural villages of the country and 40% of loans are going towards agriculture.

During the last year, the MFI registered 20,000 Ebola cases among its clients in Guinea, Liberia and Sierra Leone, of which 9,000 died of the disease. Only in Guinea, 3,132 cases have been reported of which around 60% died. There were also 4 employees of Credit Rural de Guinée SA which contracted Ebola.

The economic impact of the epidemic are disastrous for the economy of the country with a main hit on the agricultural sector. The high number of deaths immediately impacted agricultural production and demand for consumption. The reduction in economic growth from 4,5% to 0,5% (source: IMF) had a direct impact on tax revenue for the small country which came down €116million.

When the borders with neighboring countries were closed, many local markets were closed as well, agricultural trade slowed down. Many clients of Credit Rural de Guinée SA were not able to sell their products and did not have the money to repay their loans increasing the institution´s portfolio at risk levels. There were even periods when the institution stopped lending for a while to manage its risk. Credit Rural de Guinée SA suffers with a loss of €1,7 million.

Unfortunately, the MIX profiles of Credit Rural de Guinée SA and many other institutions in the affected countries are currently not available, i.e., one cannot observe other impacts the epidemic might have had on institutional capacity, i.e., high PAR levels, reducing client numbers (borrower and savers), reducing savings volume, etc. However, the presentation provides some information. Unfortunately, only in French.

In case you want to be invited to future Midis de la Microfinance, just sign up.

This entry was posted in Allgemein and tagged disaster-affected countries, Guinea. Bookmark the permalink.