Bitcoin – What is it and if yes, how many?

I normally write about microfinance, but I guess we have to go with new trends and new developments. Bitcoin is definitely one very new, innovative, and potentially even tension-generating development in the global payment industry.

This is primarily an introduction to another blog I wanted to write about Bitcoin and how regulation is advancing in Luxembourg, .However, the topic is fairly complicated and I wanted everybody to understand well what Bitcoin actually is before I tell you about how to regulate it. So… to make things short: this blog provides the definition of Bitcoin and how it relates to Microfinance or to electronic money. A following blog in the coming days will be on a recently published article by Jean-Louis Schiltz, a guest professor at the University of Luxembourg and legal advisor to several virtual currency companies (since his first involvement with bitcoin through MIT Media Lab, in which he examines whether it is possible for one place to emerge as the world’s bitcoin hub and whether regulation will have a hand in this. 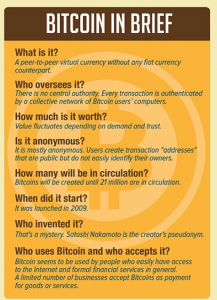 What is Bitcoin? Bitcoin is a payment system invented by Satoshi Nakamoto who published it in 2008 and released it as open-source software in 2009. The system is peer-to-peer; users can transact directly without needing an intermediary. Unlike traditional currencies, which are issued by central banks, Bitcoin has no central monetary authority. Instead it is underpinned by a peer-to-peer computer network made up of its users’ machines, akin to a file-sharing system, or Skype, an audio, video and chat service. Such a system works without a central repository or single administrator, which has led the US Treasury to categorize it as a decentralized virtual currency. Bitcoins are mathematically generated as the computers in this network execute difficult number-crunching tasks, a procedure known as Bitcoin “mining”. The mathematics of the Bitcoin system were set up so that it becomes progressively more difficult to “mine” Bitcoins over time, and the total number that can ever be mined is limited to around 21m. There is therefore no way for a central bank to issue a flood of new Bitcoins and devalue those already in circulation.

The entire network is used to monitor and verify both the creation of new Bitcoins through mining, and the transfer of Bitcoins between users. A log is collectively maintained of all transactions, with every new transaction broadcast across the Bitcoin network. Participating machines communicate to create and agree on updates to the official log. This process, which is computationally intensive, is in fact the process used to mine Bitcoins: roughly every 10 minutes, a user whose updates to the log have been approved by the network is awarded a fixed number (currently 25) of new Bitcoins. This has prompted Bitcoin fans to build powerful computers, or even to hijack other people’s computers, for use in Bitcoin mining.

Bitcoin is often called the first cryptocurrency, although prior systems existed. Bitcoin is more correctly described as the first decentralized digital currency. It is the largest of its kind in terms of total market value. Central bank representatives have stated that the adoption of cryptocurrencies such as bitcoin pose a significant challenge to central banks’ ability to influence the price of credit for the whole economy, they’ve also stated that as trade using cryptocurrencies become more popular, there is bound to be a loss of consumer confidence in fiat currencies. Gareth Murphy, a senior central banking officer has stated “widespread use [of cryptocurrency] would also make it more difficult for statistical agencies to gather data on economic activity, which are used by governments to steer the economy”. He cautioned that virtual currencies pose a new challenge to central banks’ control over the important functions of monetary and exchange rate policy

Bitcoins (or fractions of Bitcoins known as satoshis) can be bought and sold in return for traditional currency on several exchanges, and can also be directly transferred across the internet from one user to another using appropriate software. This makes Bitcoin a potentially attractive currency in which to settle international transactions, without messing around with bank charges or exchange rates. Some internet services (such as web hosting and online gambling) can be paid for using Bitcoin. The complexity and opacity of the system means it also appeals to those with less legal purposes in mind, such as money laundering or paying for illegal drugs. But most people will be reluctant to adopt Bitcoin while the software required to use it remains so complex, and the value of an individual Bitcoin is so volatile. Just as Skype was not the first voice-over-internet service, it may be that Bitcoin will be a pioneer in the field of virtual currencies, but will be overshadowed by an easier-to-use rival.

But how does bitcoin relate to microfinance or electronic money? This is a very good question! Like credit cards, debit cards, and Paypal, e-money is a mechanism to interact with government issued and regulated currencies, like euros or USD. In contrast, bitcoin, is an independent virtual currency, that has no central bank regulation, can be transferred anonymously and may pose risk to consumers due to market volatility. According to CGAP’s blog “Bitcoin vs Electronic Money”, “[Bitcoin] it is still a long way off from reaching the unbanked. Only the financially included can access the Bitcoin system through the necessary digital connections to the Internet.” CGAP’s main concern is to differentiate bitcoin from electronic money. Please see the graphic on the right for the main differences. 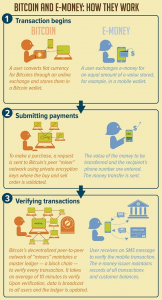 In the blog “Bitcoin and Microfinance: A Killer App?”, Brian Worley describes the way bitcoin could help with the currently financially excluded part of the population, the “underserved” in developed countries (millenials, immigrants, city-dwellers, those rebuilding credit, or a combination there of, according to KPMG). Bitcoin could “excel at supporting for consumers that are often savvy enough with technology to tackle the sometimes trying experience of using Bitcoin. In addition, the lack of overhead cost for a middleman offering digital transactions and the lack of interest from corporate competitors means doing business with underserved consumers is a no-brainer.”

Worley refers to another blog : “Peer to Peer Lending will change developing countries” making the case that peer-to-peer lending, powered by Bitcoin, will be a solution for high-cost, or unaccesible loan products in developing countries. Well, I am not 100% convinced, but am happy to be convinced otherwise.

On the website bitcoinmicrofinance.org, the case for microfinance using Bitcoin is made even stronger:

Considering the three main cost drivers of MFIs, “the first cost is the price of money. If MFI’s could transfer in funds from overseas without the massive fees that typically result, they could cut costs significantly. Bitcoin would allow them to do just that.

The second cost is the risk of default. The blockchain would allow MFIs find repeat microloan abusers based on previous transactions and thus make this risk smaller. Smaller risk means smaller cost.

The third cost is the transaction fee, defined as the staff time it takes to appraise, process, and follow-up on the loan. The appraisal process would largely stay the same, although individuals who had successfully paid back a loan could certainly have the process expedited. But ‘processing the loan disbursement and repayments’ would be handled by the Bitcoin network rather than the staff. And ‘following up’ could be made far more efficient by tracking the borrowers progress through their unique Bitcoin address on the blockchain. All this would culminate to far fewer staff hours per loan which would allow the set transaction cost to significantly decrease.”

According to them “No matter how you slice it, Bitcoin has tremendous cost-saving potential for microfinance. Integrating Bitcoin would not only allow drastically lower interest rates, it would modernize the industry, and bring basic banking to millions of impoverished individuals. Bitcoin could renew the promise of microfinance.”

This entry was posted in Allgemein and tagged access to finance, bitcoin, digital financial services. Bookmark the permalink.