Breaking Free of the Branch! 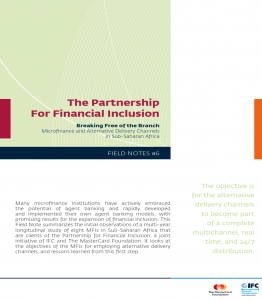 Very excited to present you my latest publication! Before joining the European Investment Bank in Oktober 2015, I was working as independent consultant and specifically on „The Partnership for Financial Inclusion.“ This initiative was a joint effort by the International Finance Corporation (IFC) and the MasterCard Foundation (MCF). Besides an overall programme evaluation together with Oxford Policy Management (OPM) , I had been primarily hired to develop a business case of Alternative Delivery Channels (ADC) or banking agents in microfinance. Via a multi-year longitudinal study of eight microfinance institutions (MFIs) in Sub-Saharan Africa, we were helping these institutions to implement ADC channels to achieve profitable growth, plus we were asked to identify general lessons about ADC implementations. In this very first publication we wanted to present  the initial objectives when the MFIs set out to launch agent networks and their lessons learned from this initial first step. The participating institutions are:

Of these 8 MFIs, six institution have already launched their ADCs, two are still in the planning phase. The publications is looking at the different strategic decisions the MFIs took, and some of their operational choices:

The business case does not only look at qualitative factors as described above, but we started also to track a few indicators along all 6 MFI projects. Please find a list of these indicators in the publication itself.

The document also talks about the lessons learned, but I will stop myself here so you will still find it interesting to actually read the publication. Online you will only find a shorter version of the full publication. Please contact me if you wish to receive the more complete document.