EIB`s support of microfinance outside Europe 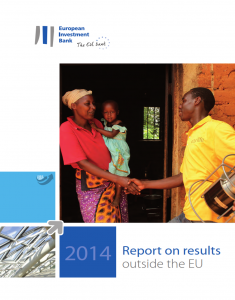 I had a meeting five weeks ago at the EIB and was going through their publications while waiting for my contact. I found some publications on their work on microfinance and small and medium enterprise (SME) finance, and thought I tell you about it as well as about their ReM, their Results Measurement Framework.

The EIB is active within and outside the European Union helping leading microfinance providers, investment fund managers, and other stakeholders to increase sustainable and responsible access to finance;

Outside the EU, the EIB is active across the sub-Saharan African, Caribbean, and Pacific (ACP) regions, as well as in the Mediterranean partner countries (FEMIP) where the EIB portfolio exceeded EUR 400million (Dec 2014);

The ACP region presents the EIB’s largest microfinance involvement with a total portfolio of more than EUR 366 million in debt and equity in microfinance vehicles (MIVs) and microfinance providers. Kenya, the Dominican Republic, Nigeria and Tanzania, are the top beneficiary countries. Fifty percent of the ACP portfolio consists of investments in MIVs.

Microfinance operations in the ACP region are carried out under the ACP European Commission Partnership Agreement (the “Cotonou Agreement”, 2000-2020) and funded from the European Development Fund (EDF). The EUR 500 million Impact Financing Envelope launched in 2014 enables the EIB to support projects “promising a higher development impact whilst also bearing greater risks, including in the microfinance sector.”

The EIB is one of the largest lenders in the Middle-East and North Africa (MENA) region with an outstanding portfolio of EUR 36.5 million committed in microfinance providers supporting over one million borrowers.

The Neighborhood Investment Facility is a new risk capital facility launched in 2014 worth up to EUR 300 million. Up to half of it is set to be invested, lent or provided in form of technical assistance to microfinance intermediaries over a 6-year period. This complements the existing EUR 6 million FEMIP Impact investment envelope which provides risk capital for investment in microfinance institutions pursuing economic, social, environmental and/or innovation goals as their primary objective.

The EIB’s Report on Results outside the EU describes the results from the Results Measurement ReM Framework which had been introduced in 2012. The ReM tracks project results, the contribution the project makes towards EIB’s objectives, and the difference that EIB involvement makes, its “additionality.”

New projects financed in 2014 outside the EU: Their objectives are set by the EU or its member states. The external mandate covers 68 countries in four regions (pre-accession countries, the EU Southern and Eastern Neighborhood and Russia, Asia and Latinamerica, and the Republic of South Africa. The Cotonou Partnership Agreement covers operations in 78 ACP states. The lending outside the EU supports two objectives:

a) local private sector development, and

b) development of social and economic infrastructure.

In 2014, the EIB signed 92 financing contracts approving EUR 7.98bn helping to mobilize a further EUR 13.9bn in finance from other sources.

The report is then divided into EIB funding towards

When looking at the access to finance section, the following stands out:

Credit lines approved under the ReM framework have sustained 105,000 jobs via loans to SMEs and mid-caps through 8 projects in Turkey, Serbia, and FYROM. 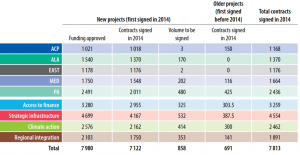 However, I beg you to read the report. This blog only represents a small fraction of EIB’s work in these regions. It is quite a big animal (one of the largest IFIs) and will have to deliver on the EFSI (“the Juncker Plan”) w/in Europe which will definitely be a challenge.

This entry was posted in Allgemein and tagged impact investing, microfinance. Bookmark the permalink.