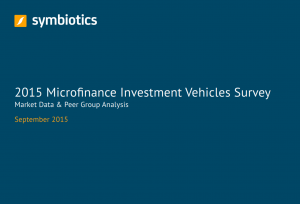 I still remember how a CGAP colleague and I wrote the first report on investment funds investing into microfinance. The task was not so easy since the real financial sector terminology and our donor-focused microfinance lingo was very much out of tune. We would ask for “committed” capital or “disbursed” and where only answered by blank eyes or silence. It was difficult to report on debt and equity going into microfinance since we were also not quite clear if we were looking for the overall portfolio or the amounts newly invested every year. Some of the resulting CGAP publications were “MIV Performance and Prospects” and “Microfinance Investment Vehicles.” The investment funds were coined “microfinance vehicles (MIVs)”, the CGAP MIV Disclosure Guidelines were published, and the exercise is now in its ninth edition which is now prepared annually by Symbiotics. Their latest report just came out on September 15 2015 which they announced in a press release on September 16 2015. Let me  tell you a little about its findings:Data sources (84 MIVs):

The Survey sample does not include microfinance funds of funds as to avoid any double counting of microfinance investment volumes.

Institutional investors remain the prime funding resource for MIVs (51%) but capital from the public sector has grown significantly in 2014 (+17%).

The 84 MIVs surveyed are managed by 43 different asset managers located in 16 countries. Thirty percent of the microfinance portfolio is managed from Switzerland, 25% from the Netherlands. American asset managers have the most MIVs under management (23%).

MIVs had a higher currency risk exposure with the unhedged portion of local currency debt investments amounting to 16.1% of direct debt investments (vs. 13.2% in 2013).  Another indicator that increased is the percentage of loan loss provisions which represented 2.6% at the end of 2014 compared to 1.1% as of December 2013.

MIV investment in other sectors than microfinance amounts to USD 7.9 million on average, representing 7% of MIVs’ total assets. Close to 60% of this volume is targeted at financing “Other Activities” such as SMEs, education, healthcare, fair trade and investments in other market instruments. Additionally, one third of the “Other Portfolio” finances organizations involved in agriculture-related activities.

MIVs’ yield on direct debt microfinance portfolio were stable in 2014 on a weighted average basis (6.8% vs. 6.9% the previous year). If a constant exchange rate is applied to the income and debt portfolio figures, the weighted average yield for 2014 is above the 7% level.

Number of active borrowers financed reach close to 260,000. Microfinance investees from an MIV portfolio display an average loan size to end-clients of USD 1,622, an indicator that has been decreasing since 2012 and stands at its lowest level since 2009 (USD 1,553). Sixty-six percent of borrowers are female and 49% live in rural areas.

Client Protection Principles from the Smart Campaign have been largely endorsed by participating MIVs (99%) whereas only a small portion of their investees (25%) have undergone a Smart Assessment.

Management fees and Total Expense Ratio (TER) remain stable while slightly decreasing across the 2013-2014 period for a constant sample of 44 MIVs.

Overall, net returns to investors have increased as unlevered vehicles performed over the 3% mark in 2014 for USD, EUR, and CHF share classes.

This entry was posted in Allgemein and tagged investment funds, research. Bookmark the permalink.