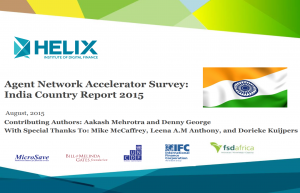 The Helix Institute launched another of their Agent Network Accelerator Surveys. This time on India.

For those who do not know them yet, The Helix Institute of Digital Finance, was founded in November 2013 as a partnership between MicroSave, the Bill & Melinda Gates Foundation, the International Finance Corporation (IFC), and the UN Capital Development Fund (UNCDF). In Addition to world-class Training, they also conduct cutting-edge Research  on digital financial service Providers and I suggest you should definitely check out their blog and the discussion it generates on LinkedIn.

But coming back to the Agent Network Accelerator Survey on India. There is quite some interesting information coming out of it:

Transaction volumes are low when compared to other countries. With only Pakistan being lower, all other countries (Bangladesh, Kenya, Tanzania, Uganda) have more number of Transactions happening at the agent. These numbers even include transactions for the Pradhan Mantri Jan Dhan Yojana (PMJDY) government program. Please see the box on the right for more information on PMJDY. 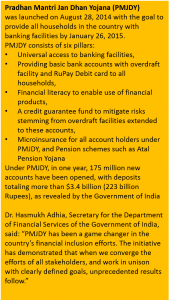 A large number of agents make losses. Agent earn a median of less than USD2 a day, which proves complicated especially considering the large number of dedicated agents. Twenty-four percent of agents receive  fixed monthly component  from service providers (around USD55). One might conclude large numbers of dormant agents or high Dropout rates. However, recent MicroSave Research suggests that these are still low at 20%. Agents in Metro Areas make significantly higher profits probably due to higher Transaction volumes of domestic remittances.

Operating expenses are high in India. Rent, electricity, and travel expenses for liquidity management constitute the bulk of operational expenses for agents, one reason being that agents in India are primarily dedicated agents which have to allocate full cost of the outlet to the agency business.

In the more qualitative research the following results stood out:

Agents seem to lack confidence that they have the necessary Support to resolve customer concerns.

52% of agents reported that their providers’ Marketing activity was ineffective in generating awareness about digital financial Services.

Ok, as with all blogs I cannot write about everything. So above you find the main conclusions and results but it would be even better if you just had a look yourself at the pdf.

In Addition to the Helix ANA Report, I found a blog post “Building India’s Model of Agent Banking“, CGAP had launched in June 2012. AT the time, CGAP had just conducted a national survey to capture “big picture on agents across the country.” The use of customer service Points (CSPs), i.e., banking agents, was in 2012 still new in India although there were about 80,000 such points nationally. The expansion at that time meant most CSPs had been operating for less than 24 months. In the Helix ANA, it is said that “more than half of agents have been operating less than two years.” i.e, it Looks asif the agent netowrk also turns over quite quickly.

In Addition, India just joined the UN’s Better than Cash Alliance. This announcemnet on September 1 2015, came on the first anniversary of Prime Minister Narendra Modi’s flagship financial inclusion programme Pradhan Mantri Jan-Dhan Yojana (PMJDY), see box above. The new partnership with the Better Than Cash Alliance, made up of governments, companies, and international organizations, is an extension of Indian Government’s commitment to reduce cash in its economy. Digital financial services lower the cost of providing financial services and make it more convenient for poor people to access their accounts. Finance Minister of the Government of India Arun Jaitley mentioned that they opened 10 Million bank accounts in a single week, but “now as a next step, the aim is to utilize these accounts for extending insurance, pension, and credit facilities to those who are currently excluded from these benefits.”