Investing in LMDF? I get 5 times what I would get at the bank!

I guess many of you have also been disappointed by current rates on savings accounts, money market funds, etc. In June 2014, in Luxembourg, I would have gotten 0,4% at the Spuerkees, at Fortuna, and BGL, and 0,5% at ING. At that time, inflation was at 0,85%.

Even with my little financial understanding, I do get that by keeping money in these banks, I will lose around 0,35 to 0,45% of my cash per year. Ok, this might not be much, but might there not be a better solution…

Well, I guess I could open a savings account with ProCredit Bank in Germany (yes, this is the German bank of the ProCredit network which you might have already seen in my blogs). With them, I would at least get 0,9% p.a. which looks like a good deal considering that inflation reaches 0,2% in Germany in January 2015. However, in Germany I might be asked to pay investment income tax (25% plus solidarity surcharge and maybe church tax)…. and my gain is gone again.

I could also try peer-to-peer lending platforms like Lending Club where my funds would be invested into different personal loan types. According to a colleague of mine, you can easily earn 8-9% p.a. with them. But evidently there is no guarantee, no deposit insurance which would make this investment fairly risky. 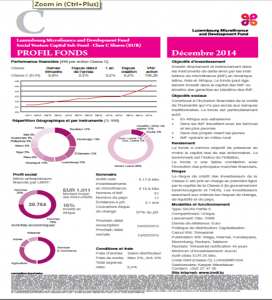 At least for now, I think I found a place to place my cash: The Luxemburgish Microfinance and Development Fund. With 15.9million invested in microfinance institutions (MFIs) in 17 countries to finance the growth of their microfinance portfolio, the fund also invests in equity instruments issued by MFIs and can also put in place and intermediaries guarantees. The LMDF with their 2-person team just launched their Factsheet for the year 2014 and it shows an interesting result compared to the rates I mentioned earlier:

and by reaching this rate – which looks slightly better than leaving my cash with a bank in Europe – the LMDF re-finances micro-entrepreneurs of 31 MFIs of which 75% are women.

Evidently, this will not make me a Bill Gates, but it is more than at the bank, and I can also support my favorite topic: microfinance. If I would have invested in the LMDF in December 2009 when it was launched, I would have made to today 5,3%.

Interested? in a fund targeting rural MFIs in Sub-Saharan Africa which primarily work with the very poor, women, and young people? The next subscription date is on March 24 2015 and you should definitely join their mailing list so you are up-to-date on the different microfinance events.

If you are interested, but do not live in Luxembourg, please have a look at the legal notice.

This entry was posted in Allgemein and tagged investment funds, Luxembourg. Bookmark the permalink.