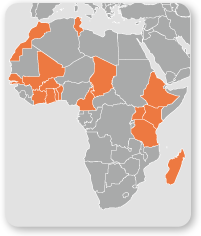 It happened on November 5-6, 2014, it happened in Debre Zeit in Ethiopia, and it involved the CEOs of around 14 MFIs from 10 African countries all dedicated to innovating around rural finance and representing 1 million clients living in rural areas.

The 2014 annual CEO meeting of the Pamiga (Participatory Microfinance Group for Africa)  was a huge success! Pamiga has been developing this network of like-minded microfinance institutions (MFIs) since 2006 from scratch and since then has had great success in …

I must say I was very much impressed by how bottom-up this network is operated. The meeting was concentrated on getting the MFI network members to decide on what they wanted to do in phase III without having the Pamiga team impose any activities or workstreams. it was great to see how after two phases (phase one: 2008-2012, phase 2: 2012-2014) how close the MFI partners have grown. They share their successes and their failures, they provide each other with advice and support, and they are willing to innovate together on products, delivery channels, etc.

All this is made available by the Pamiga team, a fairly small group of people working in three Pamiga offices (Dakar, Nairobi, Paris) and all dedicated to reach Pamiga´s mission:

To unlock the economic potential in rural Africa, by promoting the growth of existing financial institutions that service rural areas!