A recent article in the Financial Times (June 25, 2014) brings the topic and discussion around it back on the table. Psychometric tests as part of a credit analysis become increasingly popular, especially with commercial banks and large microfinance institutions. It is mostly those institutions which are trying to reduce the administrative burden and cost of doing microfinance, visiting the client in his business, at home, counting inventory, talking to the neighbors as references, etc. By yielding profiles of loan applicants´ honesty, intelligence, aptitude and beliefs, the tests facilitate lending to the otherwise called “unbankable” borrowers without a credit history, hard collateral, or an active account. But is the thorough credit analysis in microfinance with an in-depth knowledge about the customer and his business really possible to pack into a list of a few questions?

I had seen a presentation by Jared Miller, Director at Entrepreneurial Finance Lab (EFL), a US psychometric company spun out of Harvard University, at the FOROMIC 2012 in Barbados. I must say, the idea of asking clients a few questions and determining a moral profile, and therefore taking a lending decision scared me quite a bit. To give you an idea please find below a few example questions of a typical psychometric test which had been published by the Financial Times: 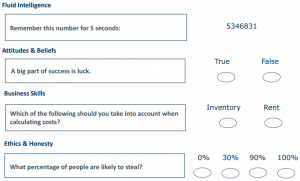 However, the technique seems to be increasingly accepted, since also Matt Gamser, Head SME Finance Forum at the International Finance Corporation (IFC) mentions that “psychometric and other methods of alternatively assessing ability and willingness to repay loans will be very important in closing the SME (small and medium-sized enterprise) credit gap, particularly for the smaller firms.” The Financial Times article also provides real success stories, e.g.,

Janalakshmi Financial Services (JFS), a Indian microfinance company. They used EFL tests around 7,000 times over the last year and clients scoring in the bottom quartile were nearly 2.5 times more likely to fall behind on their repayments. The top group of respondents had a default rate so far of around 0.7%. All clients are women with no account, no collateral, and sometimes no verifiable address.

BUT, there is also Stanbic Bank in Tanzania.They launched an express loan product to traders of Kariakoo Market in Dar-es-Salaam. The credit analysis for these loans only (!!) include a psychometric test, there is no collateral and it is disbursed within 3 days and can reach up to USD18,500 (!!). Evidently, the product sold: In the first two weeks the Kariakoo branch extended over 150 express loans for more than USD 615,000. However, in this case, things did not work out so well… The Kariakoo product showed a loss ratio of 83% after a while and an online article mentions how Kariakoo traders took advantage of the bank’s laxity in loans management, especially after learning that their loans were being managed from Kampala in Uganda. Stanbic officially announced a Sh14.9 billion loss during the quarter ending September 2013, according to its latest financial statement.

So are these psychometric test threat or promise? Considering the two examples above there still seems to be a benefit of having some background and expertise in microfinance and it is not possible to just use a simple scoring tool to judge if a low-income client will pay back his or her loan.

Especially since clients will find out how these tests work. According to Zahid Ibne Hai, general manager at IDLC Finance, Bangladesh raises his concern in the Financial Times, clients will find out how the psychometric test is build, how it works and will “game” the system to produce desired results. Zahid´s loan book has been growing 45% annually, and he is open to unorthodox methods of credit analysis including facebook checks which might uncover “louche lifestyle” while people paying their phone on a post-paid contract might be better credit clients than those only using a pre-paid contract.

I must say, I am not yet convinced that psychometric testing can substitute a full credit analysis. It might be possible to complement it successfully, but even a client without a collateral or credit history is worth a full analytical credit analysis especially when he or she is not quite certain if the business will be able to pay for the loan. How can a psychometrically-based analysis determine monthly possible repayment amounts, or even the full loan amount. And microfinance clients, looked at from a more social perspective, need the contact with their loan officer, and need it to be more than just be given a sheet of paper to be filled out. I know that his is costly, but I think it is worth it.

This entry was posted in Allgemein and tagged alternative data, credit analysis. Bookmark the permalink.