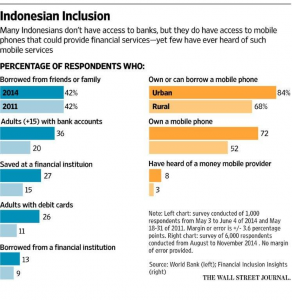 The recent visit of Dutch Queen Maxima has brought financial inclusion back onto the agenda of Indonesia`s government.

According to the World Bank`s Global Findex report 2014, only 36% of the Indonesian adult population (older then 15 years) has access to a bank account in a formal financial institution. It has a population of 250 million, over 13,000 islands and about 300 different ethnic groups.With Indonesia’s wide geographic scope, the main issue is how to reach the unbanked poor in remote areas using cost-efficient means. Conventional, branch-based approaches to expanding financial services would require significant infrastructure and operational expenditures. On the other hand, because of its wide reach, mobile phones offer much promise in providing financial services to the poor in rural regions. According to CGAP’s report, there are 172 million active SIM cards in service in Indonesia, but it is estimated that this represents only 90 million customers, many of whom hold multiple accounts. This implies a penetration rate of around 38% of the population.

Since 2007, the central bank had introduced an electronic money program which had been adopted by 20 licensed banks, telecommunication companies and electronic payment agencies.

The first mobile money scheme in Indonesia, named T-cash, was first launched in 2007 by Telkomsel, the biggest Mobile Network Operator (MNO) in Indonesia. As of July 2011, there were 3 MNOs that have been granted licenses from Bank Indonesia as e-money issuers and mobile money providers in the country: Telkomsel, Indosat and Exelcom. However, the last two companies are still in very early stages of development. However mobile money is becoming quite popular in Indonesia.

The mobile phone could be a cost-effective way to enhance access to financial services in Indonesia for the following reasons and probably even more:

However, uptake has been low. A survey published last November by FII showed that only around 3% of Indonesians were aware of the concept of mobile money and those that were had only heard of one type of service. At the same time, more than 60% of the population has a mobile phone and three-fourths have access to one, according to the FII survey.

Developing infrastructure is often now enough. Adoption of the service is even more important and should drive the financial inclusion actions in Indonesia. Just a few ideas:

This entry was posted in Allgemein and tagged access to finance, digital financial services, mobile banking. Bookmark the permalink.