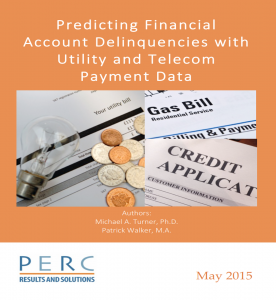 I still remember my times at CGAP when the Technology Team was working with PERC, a research center and advocacy group working on:

abolishing the “credit catch 22”, i.e., mainstream lenders rely on credit reports to assess credit risk and to extend a loan, plus credit bureaus only have data on the already banked population. In this dynamic to qualify for a loan, you will already have to have credit.

pointing fingers at alternative data which presents a wealth of data that could be used to drive financial inclusion. If it can be accessed, it could dramatically increase access to financial services for low income persons worldwide.

At the time, we were primarily interested in using transactional data from airtime top ups, utility payments, rental payments, etc. to assess a client’s repayment capacity and willingness. I have been interested in looking more into the power of alternative data primarily since I am convinced that it would not only help credit-seeking people in the developing world to improve and strengthen their credit scores, but also many unbanked people in the developing world to Access credit without having to have had credit before. I had written a blog “Psychometrics in credit Analysis – Threat or Promise?!” describing credit Analysis based on questionnaires yielding a person’s profile on honesty, intelligence, aptitude and beliefs. These tests facilitate lending to the otherwise called “unbankable” borrowers without a credit history, hard collateral, or an active account. At the time I asked the questoin if the thorough credit analysis in microfinance with an in-depth knowledge about the customer and his business is really possible to pack into a list of a few questions? And the blog post also describes a not so successful case Stanbic Bank in Tanzania when using psychometric data for credit analysis.

Now, coming back to PERC. PERC recently launched a study which confirms that utility and telecom payment histories (non-financial data) are predictive of future delinquencies on traditional financial credit accounts (bank cards or mortgages) or of having future derogatory public records. PERC utilized credit scores and credit file data from one of two credit bureaus (TransUnion and Experian), and socio-economic data from Acxiom (e.g., household income, race/ethnicity). The sample consisted of 4 million credit files from July 2009 to June 2010, as well as utility and telecom payment histories prior to July 2009. And they looked at credit cards issued by banks, mortgage accounts, and the incidence of derogatory public records (including bankruptcies).

But let’s quickly come to some of the results of the study:

After controlling for traditional data credit scores, Utility/Telecom Data Still Predictive: Active bank card customers with VantageScore credit scores in the 800-899 range had a bank card delinquency rate of 2.7% if they had no prior utility/telecom delinquencies reported and a rate of 11.4% if they did have one. VantageScore is the name of a credit rating product that was created by the three major credit bureaus (Equifax, Experian, and TransUnion).

Not fully reporting utility/telecom payments is unfair to those who pay on time: Utility and telecom customers who pay on time appear to have lower scores than they would if those payments were reported to the main consumer credit databases of the nationwide credit bureaus). These on-time customers are penalized by the status quo in which non-financial payment histories are not fully reported to credit bureaus. Conversely, utility and telecom customers who pay very late are higher risk than their traditional data based credit scores indicate

Utility/telecom data found predictive during financial /mortgage crises: The period examined in this study for credit/financial outcomes was from July 2009 to June 2010 and a payment history prior to July 2009. These results speak well to the predictive potential of non-financial data in times of financial crisis when risk assessment is particularly crucial.

Use of Utility/Telecom data can expand safe lending: By segmenting consumers by utility/telecom payment histories or using this data in credit scores we found that lending could safely expand over five percent. Many consumers with no credit data, who as a group might be viewed as too high risk, could be safely extended credit if their utility/telecom payment histories were considered.

This entry was posted in Allgemein and tagged alternative data, credit analysis, research. Bookmark the permalink.