Can the time I spent on Facebook determine my credit score? The birth of a Chinese Lending Club… 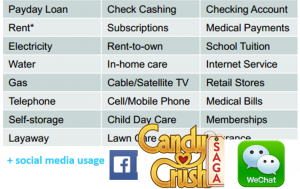 …this is at least the hypothesis of China’s largest peer-to-peer lending site. They have  rated 50m Chinese consumers for creditworthiness using social networking and computer gaming data. i.e., if you spend a lot of time chatting on social networks or playing computer games, you might be helping your credit score.

The Financial Times launched an article “China P2P lender Banks on social media usage” which describes how China Rapid Finance has issued 3 Million P2P loans within 6 months with a credit Analysis that included a credit score based on consumers’ time and frequency on social media Websites.

Especially in China, with ist 1.2 billion mobile phone users, 650 million internet users, and 500 million smart phone users, using alternative data will have an enormous impact.  Based on numbers from the ChinaRapidFinance website, in China we currently have 537 million people without bank accounts, 580 million have bank accounts but no credit profile, and only 290 million have a credit card and a credit profile, i.e., 80% of consumers do not have a credit history and therefore no access to credit. As of March, 31 2015, China Rapid Finance became the first lender in China to offer borrowers pre-approved loans over mobile devices. These loans were delivered to the borrowers in under 2 hours and with no paperwork required (scary!!)

At the same time, I have my doubts about the correlation between how long or how often I spend my time on Facebook, and how willing I am to repay my loan.

The data to develop the credit score was provided by Tencent, drawn from the internet group’s hundreds of millions of users. They were processed by China Rapid Finance using an algorithm that looks at frequency and amount of time spent using Tencent services, everything from WeChat, the social chat app with 600m users, to Candy Crush Saga, the popular smartphone game.

According to Zane Wang, founder and chief executive officer of China Rapid Finance, “The credit-scoring algorithm examines how long and how frequently people use Tencent services. The more someone uses social networking services [the more it] shows that people are concerned for their reputation, concerned for their integrity. Internet purchasing history — even buying points in an online computer game — was another key variable”, he added. The China Rapid Finance platform connects would-be borrowers with lenders who are seeking higher returns than are offered by bank deposits and potentially also an alternative investment to China’s risky stock markets.

The loans are not exactly cheap, with a 21% p.a. interest rate — about 3 percentage points more than traditional credit cards. Because the data do not shed any light on income or ability to pay back, borrowers start out small at around $80, with repeat borrowers enjoying credit up to $10,000. The average loan size is USD6,500. And China Rapid Finance (CRF)  is not alone: China is currently home to more than 2,000 online lending platforms. However, also Wang sees some risk: “P2P is a double-edged sword for China,” Wang said. “It has the potential to incur a crisis of default, but on the other hand, it could become a miracle cure for China’s imbalanced financial system, which has failed to serve the majority of consumers.” “A robust risk-control system was needed to avert the danger of defaults, he said.

The P2P model has spread across the mainland without proper regulatory oversight, leading to fraudulent loans and non-performing assets, which sparked fears of a credit crisis. Operators offer lofty interest rates, typically 2 %/month, to attract depositors and Investors. At the moment most platforms typically serve large-scale clients, such as property developers, with single multimillion-yuan loans. A Chinese version of the US Lending Club is the answer to helping the mainland’s financial reform,” Wang said. “CRF is trying to highlight the benefits of a Chinese Lending Club.” The main difference between the Lending Club in the US and the one planned on the mainland is that no credit records exist for the 500 million potential customers, many of whom are new borrowers. Lending Club raised almost US$900 million on the New York Stock Exchange in December, completing the largest US tech initial public offering of 2014.“Based on the vast population of 500 million consumers, the business scale of China’s own Lending Club could be several times the US predecessor,” Wang said. “We are going all out for it.”

So in previous blogs we have now seen very different kinds of alternative data:

It is exciting to see how this sphere is innovating very rapidly. However, one should always ensure that the consumer taking the loan really understands what he or she is getting into and that lenders analyze well their repayment capacity. Alternative data is a complement for the financial credit analysis, but should not be the exclusive element.